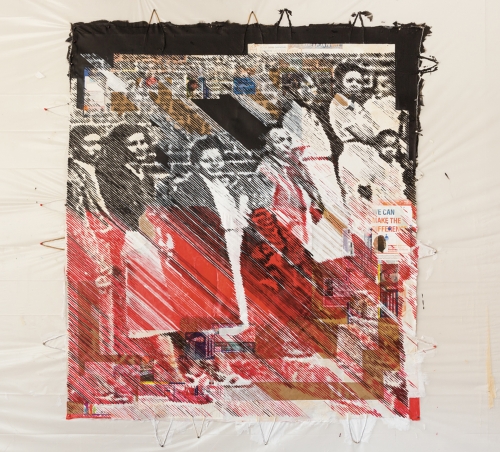 AS A GRADUATE STUDENT at Yale University in the mid-2010s, Tomashi Jackson had a striking realization: The essentialist language of Josef Albers’s pioneering instructional text Interaction of Color (1963) closely mirrored the rhetoric of the segregation policies fought by Thurgood Marshall and the NAACP Legal Defense and Education Fund in civil-rights court cases. The Houston-born artist has in turn developed her own language of abstract painting, one as rigorous in its inquiries into shape and hue as it is in uncovering legacies of systemic racism in the United States. Visitors to the 2019 Whitney Biennial may recall her contribution: dense architectural surfaces, hewn from found materials, that reveal histories of housing displacement and gentrification in New York by revisiting the largely untold story of Seneca Village, a free Black ninenteenth-century community that was razed by Irish and German immigrants to make way for present-day Central Park. Repeatedly, Jackson’s work visualizes how so-called progress is inextricably linked to violent systems of exclusion.

During a residency in the fall of 2019 in Athens, Jackson became preoccupied with the origins of democracy, a subject she will confront head-on in “Love Rollercoaster,” an exhibition at the Wexner Center for the Arts in Columbus, Ohio. The show, timed to coincide with the US presidential election this November, borrows its title from a 1975 song by legendary funk group the Ohio Players, and together, the five paintings that will be on view cannily evoke the brutal spectacle and tumult of American politics. The three incomplete works shown here each began with a photograph of Black voters queuing outside a Baptist church in 1948 that Jackson discovered in the online archives of the Library of Congress. Using a projector, Jackson painted this image in diagonal hatches onto supports composed of voter-registration applications, various voting pamphlets and flyers, Pentelic marble dust collected in Athens, and soil gathered from the Lucy Depp Park in Powell, Ohio—a site along the Underground Railroad. If these multitextured layerings model the preservation of collective memory, they also serve as metaphors for enduring suppression. Today, 155 years after Juneteenth, barriers such as felony disenfranchisement, discriminatory voter-ID laws, and the racial gap in voting wait times stand as monuments to the unfreedom on which the United States was founded.

Galvanized by the heartbreak of generational trauma and decades of prolonged crisis, Jackson sees her work as a mode of healing, a means to salvage the ruptured records of the past in order to better understand our present. Although the following pages are, in a sense, fleeting—each contains a work in progress—their reparative grace reminds us that the urgency of now is part of a historical continuum, a seemingly never-ending ride of sharp turns, slow climbs, and dizzying drops.