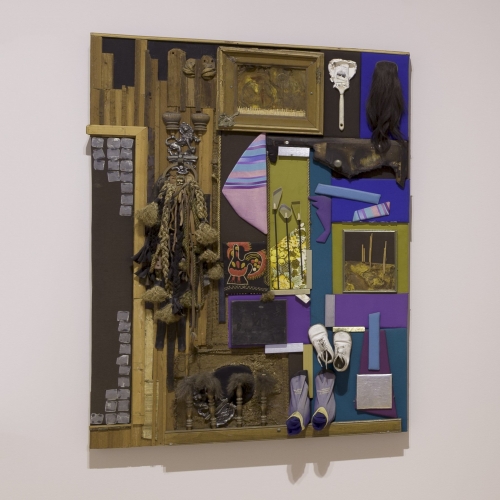 Noah Purifoy One White Paint Brush and a Pony Tail, 1989
Courtesy of Sue A. Welsh

Noah Purifoy
A progrenitor of the West Coast assemblage movement, along with such artists as Bruce Conner, George Herms, and Betye Saar (who are also represented in this exhibition), Noah Purifoy created sculptures imbued with the history of the discarded or found objects he repurposed. Most notably, Purifoy began his career by creating sculptures using the charred debris he collected from the streets following the 1965 Watts Rebellion. He saw such works as bringing together elements of Dadaist collage, traditional African sculpture, and outsider or folk art into a practice that was indebted to the charged civil-rights struggle that he was witnessing. The work on view here, made just before the artist moved to Joshua Tree and began creating his monumental outdoor museum, is emblematic of the inventiveness, keen sense of form and color, and wry sense of humor found throughout his assemblages.

Beginning in spring 2019, MOCA will dedicate its downtown locations to multiple exhibitions celebrating the museum’s 40th anniversary and its permanent collection. Each location will feature special exhibitions highlighting different themes and stories found within the institution’s permanent collection of more than 7,000 objects. As part of this celebration, MOCA will debut a new ongoing series of exhibitions titled Open House. For the first time in its history, MOCA invites Los Angeles-based artists to organize exhibitions drawn from the museum’s extensive collection of objects. The artists selected will work together with MOCA curators to explore how the museum’s permanent collection can continue to serve, educate, inform, represent, and delight the diverse and extensive community of artists in Southern California. Open House will give visitors a chance to see the depth and breadth of MOCA’s collection focused through the unique lens provided by the community of artists that it serves.

MOCA will begin this new exhibition series with Open House: Elliott Hundley. Multimedia artist Elliott Hundley will explore the architecture and origins of collage, exploring how the visual and material logic of this technique has informed artists in MOCA’s collection, as well as his own practice.

Lead underwriting for MOCA’s 40th anniversary exhibitions and programs is provided by Sean and Alexandra Parker.